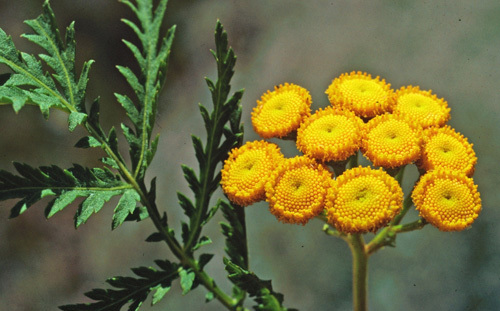 The name “tansy” comes from the Greek word “athanasia,” which means “immortality.” Tansy was thought to confer immortality, so it was used for embalming.

In spite of lacking research and evidence of any benefits, tansy remains a very popular and versatile herbal remedy, with a multitude of medicinal uses and applications.

In general, Tansy teas and extracts increase saliva and blood flow to the tissues in the mouth, stomach, intestines, and pelvic area. Tansy extracts may calm the nerves, decrease pain, promote sweating, increase bile production, and increase appetite in people with liver and gallbladder problems.

The most important medicinal quality of Tansy is the anti-parasitic and worm -expelling properties the active ingredients. The infusion of the dried leaves and flowering tops of tansy is often used to kill lice and as anthelmintic for threadworms and roundworms in children. Tansy is sometimes combined with other herbs for symptomatic relief of enlarged prostate.

Other historical and modern medicinal applications are listed below.

Some women use tansy to start menstruation or cause an abortion. DO NOT USE IN PREGNANCY.

Tansy may be applied directly to the affected area for scabies, itching, bruises, sores, sprains, swelling, freckles, inflammation, vaginal discharge, sunburn, toothache, and tumors. It is also applied to the skin as an insect repellent.
In foods and beverages, tansy is used as a flavoring agent. Some use Tansy as a natural pest deterrent in the garden.

Number of ratings: 1
Average rating: 5
excellent
from Elizabeth Witt on 17/02/2021
arrived promptly, made tea for my husband's itchy skin condition, smelled very nice, he said has an astringent effect on his skin and feels good.